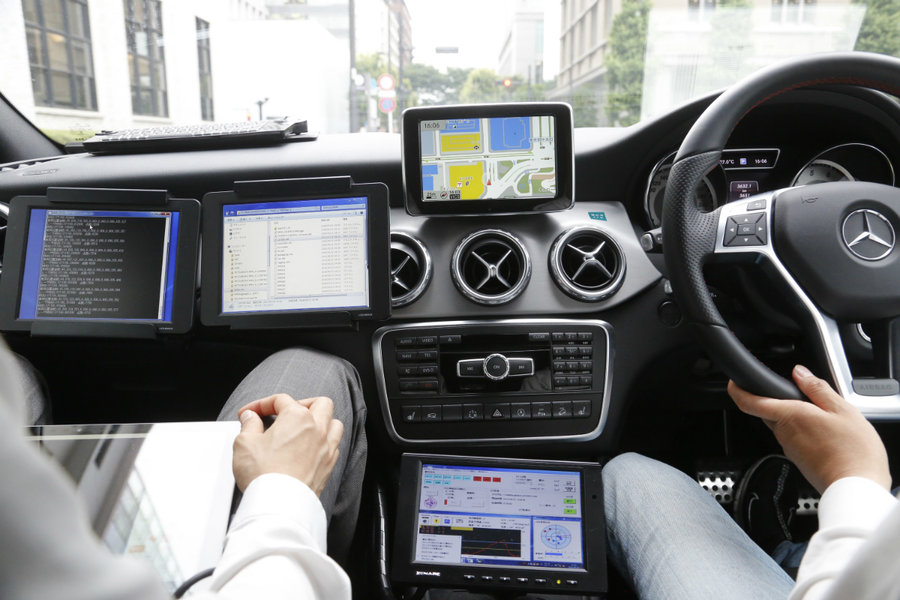 Technology companies are racing to develop ultra-precise digital maps that can guide self-driving cars within inches of where they should be – a hurdle the industry needs to clear if it hopes to deliver on its promise of widespread use of driverless vehicles.

Japan's government is backing a 3-D mapping system developed by Mitsubishi Electric Corp. that includes a wealth of details such as trees and pedestrians. It promises to be off by no more than 9.8 inches.

That would be a big improvement over satellite-based GPS, which is used by ships, aircrafts, and increasingly by drivers or on mobile phones but can be off by up to 65 feet, especially inside buildings or underground.

The developers say the improved mapping technology likely will be used first in vehicles in isolated areas such as warehouses, or it might be used to help drivers of vehicles that aren't entirely autonomous.

Its challenges and dangers were highlighted in March when a self-driving Uber SUV being tested on a street in suburban Phoenix struck and killed a pedestrian in the industry's first fatality.

That requires precise and accurate information about not just road lanes but repairs, traffic lights, crosswalks, and buildings. That is relayed to moving vehicles, which requires additional telecommunications connections.

On a computer screen, such maps are masses of tiny points swimming around in virtual 3-D, defining a landscape of trees, roads, signs, buildings, cars, and pedestrians.

Data are collected by special vehicles carrying sensors and cameras. Those have drivers for now, but at some point autonomous vehicles are expected to take over.

"For autonomous driving, 3-D high-precision maps will be very important, allowing cars to know their positions accurately and also know what the roads are like ahead," said Yasuhide Shibata, senior general manager of Mitsubishi Electric Corp.

Japan wants driverless cars on the roads by 2020, with hopes the Tokyo Olympics that year will showcase its technological prowess the way the 1964 Tokyo Summer Games displayed its new bullet train to the world.

Among the global players:

TomTom, based in Amsterdam is working with Japanese map maker Zenrin Co.

DeepMap, in Palo Alto, Calif., co-founded by James Wu, who worked for Google Maps and Apple Maps, is promising 2-inch precision. Among Japanese automakers, it is working with Honda Motor Co.

Digital 3-D maps focus on highways, where landmarks are easier to discern and define. Mr. Khalesi thinks Toyota can gain an edge by developing technology for city streets and off-road rural areas. He hopes to use satellite imagery.

"To be honest, there is a lot of catching up for us to do. We should be open about that," Khalesi said on Toyota's digital mapping.

He said Toyota should partner with existing mapping services, and not try to "reinvent the wheel," but innovate where the technology was lacking.

"There is money to be made definitely," he said.

Japan's government-backed initiative is led by the electronics unit of the sprawling Mitsubishi group of companies, which also includes satellites, robotics, and an automaker.

Japanese automakers including Honda, Toyota, and Nissan Motor Co. are also investors in Dynamic Map Platform Co., the outfit created to make commercial applications out of the technology.

"Everybody's got a different angle on it, a different idea," said Christopher Richter, auto analyst for CLSA Securities Japan Co.

"These are things we've never needed before and so everybody's got a fresh idea, and everybody is looking for that pot of gold at the end of the rainbow," said Mr. Richter. "There's going to be quite a few pots of gold."

This story was reported by The Associated Press.

Previous Item：Google won the last maps war. Self-driving cars give other mapmakers a chance to find their own way
Next Item：Simultaneous Localization and Map Change Update for the High Definition Map-Based Autonomous Driving Car
Share：