High Definition (HD) maps are becoming key elements of the autonomous driving because they can provide information about the surrounding environment of the autonomous car without being affected by the real-time perception limit. To provide the most recent environmental information to the autonomous driving system, the HD map must maintain up-to-date data by updating changes in the real world. This paper presents a simultaneous localization and map change update (SLAMCU) algorithm to detect and update the HD map changes. A Dempster–Shafer evidence theory is applied to infer the HD map changes based on the evaluation of the HD map feature existence. A Rao–Blackwellized particle filter (RBPF) approach is used to concurrently estimate the vehicle position and update the new map state. The detected and updated map changes by the SLAMCU are reported to the HD map database in order to reflect the changes to the HD map and share the changing information with the other autonomous cars. The SLAMCU was evaluated through experiments using the HD map of traffic signs in the real traffic conditions.

Perception sensors such as camera, radar, and lidar can provide the nearby environmental information of the autonomous car based on the sensor data processing. However, the current perception technologies of the data processing have constraints to detect the all surrounding environment because of the limitations of sensor visibility range and recognition performance. To overcome the limitations, the pre-built environmental map can be used to obtain the environmental information, which is called High Definition (HD) map. The HD map contains the several physical information on the roads, such as lanes, traffic signs, traffic lights, barriers, and road surface marking, within the 10–20 cm accuracy [2]. By searching the nearby physical features on the HD map, the autonomous car can access the information without the perception processing and the sensor visibility limitations.

However, there is always a possibility that the physical environments on the HD map are changed because new physical features are added, or the physical features saved on the HD map disappear or move. The changes of the physical features which are not reflected on the HD map can cause the unexpected problems for the autonomous driving due to the incorrect understanding of the surrounding environmental information. For example, the planning system can make an incorrect decision about the behavior and trajectory due to the use of HD map that has not been updated. The localization of the autonomous car might estimate the inaccurate position due to the landmark misalignment between the perception and the HD map. To prevent these problems, the changes of HD map must be detected and managed to keep up-to-date road information.

This paper proposes a simultaneous localization and map change update (SLAMCU) algorithm to detect the HD map changes and to update the changes to the HD map database. The SLAMCU does not use the special mapping equipment for the map updating, but it uses the onboard sensors of autonomous cars (or intelligent vehicles), such as perception sensors (camera, lidar, and radars) and vehicle motion sensors (a wheel speed sensor, a steering angle sensor, and an inertial measurement unit). For the detection of the map changes, the SLAMCU algorithm uses the evidence (Dempster–Shafer) theory for the reasoning of the HD map existence. The HD map existence can be updated by Dempster combination rule based on the detection confidence and the field-of-view (FoV) configuration of the perception sensors. The map changes can be classified into three classes including the normal, delete, and new based on the results of existence inference. For the normal HD map, the SLAMCU algorithm performs a localization that estimates the vehicle position. The delete HD maps are excluded for the localization update. For the new map feature, the SLAMCU execute a SLAM (Simultaneous Localization and Mapping) that estimate the position of the map and vehicle simultaneously. A Rao–Blackwellized particle filter (RBPF) is used to concurrently perform the localization and the SLAM. The detected and updated map changes by the SLAMCU of the individual car can be uploaded to the map database of the HD map provider in order to reflect the map changes to the HD map and share with the other autonomous and intelligent vehicles.

This paper is organized as follows. Section 2 presents the definition of the HD and the problems of its changes. Section 3 introduce the SLAMCU algorithm, and Section 4 explains the map change management system. Section 5 describes the implementation of SLAMCU based on the RBPF, and Section 6 provides verification of the SLAMCU based on the experiences. The final section provides conclusion and future works.

The autonomous cars require the surrounding environment information, such as objects, traffic control devices, and roadway geometry, in order to perform the planning and control. Perception sensors, such as cameras, radars, and lidars, can provide the information of surrounding environments in real time, but the sensors have limitations for the perception range and recognition performance. The perception sensors cannot detect the physical environments that are located far from the ego-vehicle or are blocked by obstacles. Also, not all physical environments on the road can be recognized using the current perception technology. To overcome the limitation of perception, we can apply a HD map for the autonomous cars [3,4,5].

The High definition (HD) map is a detailed representation of the physical environment features, which the autonomous cars can use for autonomous driving. The HD map can be called a Highly autonomous driving (HAD) map or a precise map, but we unified the terminologies into the HD map in this paper. The compositions of the HD map classified into three types of map feature: static object, traffic control devices, and roadway geometry. The static object represents something that can be collided with the ego-vehicle, such as buildings, walls, trees, poles, and barriers. The traffic control devices can provide information about traffic rules that must be followed on the road, such as road surface markings, speed bump, traffic signs, and traffic lights. The roadway geometry provides information that should be followed by vehicles to reach the desired destination and can be represented by polylines, polynomial curves, or splines.

The autonomous car can utilize the HD map for autonomous driving by accessing information about the surrounding environment stored on the map. To access the surrounding environment information on the map, the current pose (position and heading) of the ego-vehicle must be provided to the searching engine of the HD map. Therefore, a localization algorithm that estimates the current vehicle pose is an essential component for the intelligent driving system using the HD map. The localization is able to estimate the pose using a dead reckoning (DR) of vehicle motion sensors or global navigation satellite system (GNSS). The HD map can also be used for accurate localization by aligning landmark perception with the HD map landmarks [6,7,8]. For instance, the autonomous car can estimates the position of ego-vehicle by matching the traffic sign perception from the camera and the traffic sign position data in the HD map. The landmarks must be static features that are recognized by sensors and saved in the HD map, such as buildings, walls, trees, poles, traffic sign, traffic light, and lanes.

There were many previous studies to use the HD map for the autonomous driving. A route network definition file (RNDF) was used as the HD map in the DARPA challenges to provide the routes to autonomous cars [9]. Google self-driving cars used the 3D high-accurate HD map [10]. The demonstration in Bertha Benz Memorial Route by the Daimler utilized a Lanelets that is an efficient data structure for the drivable environment map as the HD map [11]. Not only these studies, there have been many autonomous car tests based on the HD map [12,13,14,15,16,17,18,19]. These previous studies are evidence that the HD map is a critical factor in the future industry of autonomous. A technical report [20] also forecasts that the HD map is one of the key technical components of the autonomous car era. Therefore, many mapping companies, such as HERE [21] and TomTom [22], are preparing or starting to provide the HD map for the era of autonomous cars. HERE provides a HD map that contains various semantic features, such as road geometry, lane boundaries, barriers, traffic signs, and traffic lights, in 10-to-20 cm accuracy, as shown in Figure 1a. TomTom also provides semantic features similar to HERE and provides depth information for static objects via Road DNA [23], as shown in Figure 1b.

A ground mapping is mainly used for the HD map building due to the high accuracy and reliability although aerial mapping is much cheaper and faster. The process of ground mapping consists of three steps: a data acquisition, a data processing, and a database management. The data acquisition is a process to collect the information about the physical environments by surveying with special mapping vehicles equipped with various mapping sensors such as a real-time kinematic (RTK)-GNSS, an inertial measurement unit (IMU), cameras, and lidars. After the data acquisition, the HD map features (static object, traffic control devices, and roadway geometry) are extracted through the data processing. The final step is the database management for providing a service of the map management and access. Due to these series of multiple processes, the mapping cost of HD map is much higher than the mapping of the topological map that is used for the in-car navigation module.

The most significant problem with the HD map is the change in the physical features. The change of physical feature can give the incorrect environment information to the autonomous driving system, and it can cause a negative impact on the safe autonomous driving. The localization based on the alignment of landmark perception and HD map also can be suffered from degradation of the accuracy and reliability due to a misalignment by the map changes. Therefore, the changes of HD map must be detected and managed by the autonomous driving system to prevent the performance degradation. 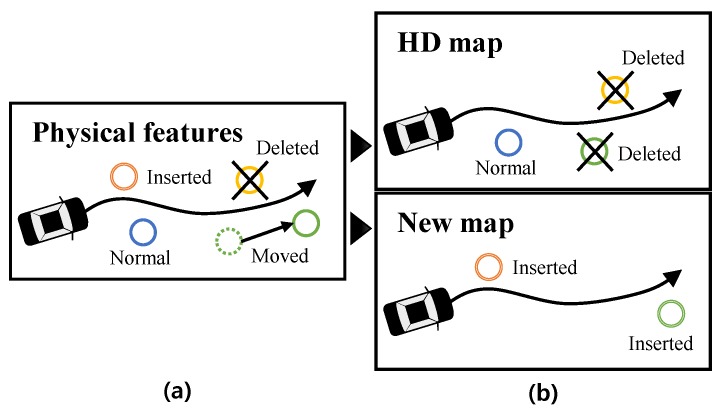 Definition of the HD map changes. (a) physical world. (b) HD map mHD and new map mnew. The map component can be classified into mHD{normal}, mHD{delete}, mHD{insert}.

3.1. Management of the HD Map Changes by Individual Autonomous Vehicles

The second way to recognize and update the HD map changes is to use the perception and localization of individual autonomous cars (or intelligent vehicles with the perception and localization capabilities) driving on the road. This method is more cost-effective than the first because there is no need to operate special mapping vehicles to monitor map changes. In addition, the HD map can keep up to date with the latest information because the map change update can be performed by multiple autonomous vehicles at the same time.

Previous Item：Japan inches closer to ultra-precise 3-D maps for self-driving cars
Next Item：Mercedes-Benz's future self-driving cars will rely on a cloud-based high-definition map updated in real time to see the world around them.
Share：