Mercedes-Benz's future self-driving cars will rely on a cloud-based high-definition map updated in real time to see the world around them.

The machine-readable map, known as the HD Live Map, will come from mapping company HERE, a former unit of Nokia sold to Audi, BMW and Mercedes in 2015 for $3.1 billion. Intel also has a stake in HERE, which it acquired in 2017 for its own self-driving car developments.

The HD Live Map is a key component of Mercedes' self-driving system, which right now only offers driver assistance but will eventually feature fully self-driving capability. The HD Live Map is composed of multiple layers providing various details, for example lane level information, dynamic road network and situation changes, and speed profile data for vehicles on the road. A self-driving car would use this information to know exactly where it is, what lies ahead and what it should do in various scenarios.

Importantly, the map has the ability to update itself in near real time by crowd-sourcing sensor data from cars within the network. This in turn will enable self-driving cars to proactively adjust to changing road conditions, for example switching lanes and adjusting speed ahead of time in the case of an upcoming lane closure. The technology can also provide human drivers with warnings about upcoming road conditions. 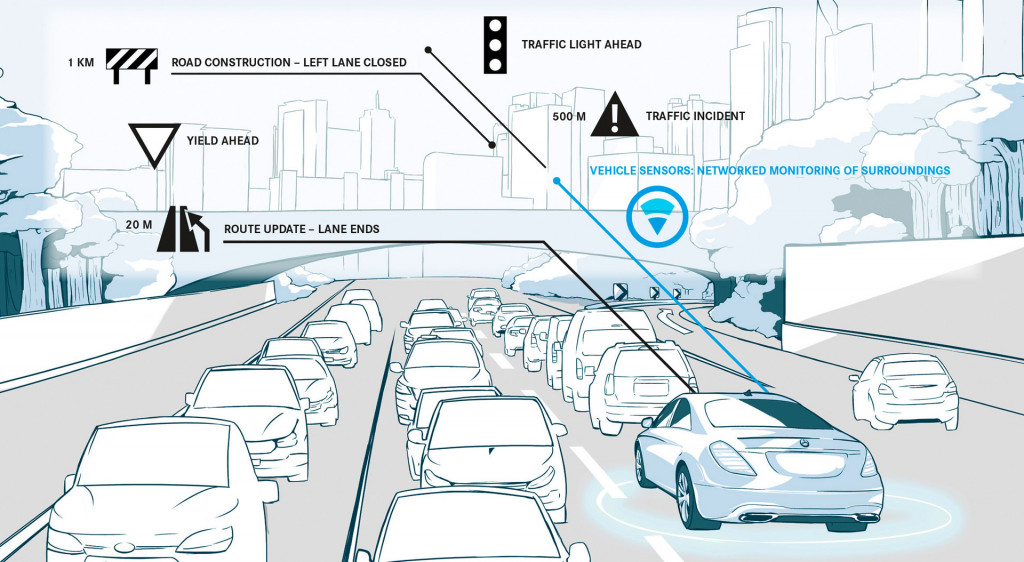 Car sensor-sourced data is the most crucial element for the HD Live Map when it comes to updating because of the sheer volume of cars on the road that can detect and validate changes to the map. HERE has already been collecting data from various Audi, BMW and Mercedes models for the past couple of years, building up the map.

“Maps with centimeter precision updating themselves in near real time is one key element for autonomous driving,” Mercedes R&D chief Ola Källenius said in a statement. “With the new HD Live Map and the rich, continuously growing information it provides we are taking a big step on the way towards autonomous driving.”