No, Tesla Is Not Years Ahead In Full-Self Driving

Reports have recently come out suggesting that Tesla is six years ahead of the field (in full self-driving).

In terms of hardware technology, Tesla is behind Mobileye by using an older 16nm process for its FSD chip vs. Mobileye’s 7nm EyeQ5.

In terms of software, how large is Tesla’s self-driving fleet, etc.? It is unlikely Tesla is ahead.

Semiconductor companies are making FSD a relative commodity. Any car manufacturer can buy a full self-driving system (SDS) or chip from Mobileye, Nvidia, or Qualcomm.

Tesla ahead in self-driving cars?

Reports have recently come out about how Tesla (NASDAQ:TSLA) stacks up against the competition. As Forbes, for example, has reported on this:

Tesla's new FSD computer has capabilities that have dumbfounded the other auto manufacturers to the degree that they aren't really sure what to do. A Nikkei tear-down of the Tesla Model 3 found that Tesla's electronics are 6 years ahead of the #1 and #2 car manufacturers in the world, Toyota and VW. They even said an engineer at a major Japanese auto manufacturer was stunned, saying that, "we cannot do it." This puts many of Tesla's competitors at a significant disadvantage in terms of keeping up with the company's capabilities and how close they could be to fully autonomous driving capability.

Now, "electronics" is a bit vague as there are many electronics in an electric vehicle, but this Forbes report in particular uses this supposed 6-year lead to refer to Tesla's self-driving car capabilities, which is powered by Tesla full self-driving (FSD) chip. This seems unlikely to me, as even Elon Musk admitted that its foundational FSD software isn't even completed yet. How large is Tesla's self-driving car fleet? How many miles have it driven? How does it stack up against GM (NYSE:GM) Cruise, Waymo (NASDAQ:GOOG) (NASDAQ:GOOGL), Mobileye (NASDAQ:INTC) and others in driving performance?

As the quoted passage refers to electronics, I assume it is perhaps ignoring the actually relevant part of self-driving cars: software. This would make more sense. In general, Mobileye expects that commercialization of consumer autonomous vehicles (AVs) will start in 2025. This would indeed suggest a six-year lead, given that Tesla's 2019 models already have the latest FSD chip developed by Tesla itself. Tesla's latest FSD chip has 144 TOPS (tera operations per second) on TSMC 16nm. This should be sufficient for FSD.

While I am not going to cover all competitors in the self-driving and robotaxi space, as others have done, I will just point out that having the fastest chip means little if your self-driving software is not adequate for commercial deployment. For comparison, Mobileye's self-driving car fleet currently runs on just one 24 TOPS EyeQ5 on 7nm, and before that on four EyeQ4 chips (~10 TOPS). Although for commercial deployments, Mobileye intends to use six with three more for redundancy.

The narrative in the Forbes article then uses Tesla's supposed six-year lead to suggest that car manufacturers are "responding" to Tesla:

Car manufacturers are scrambling to respond to Tesla, they have been for quite some time. Some are partnering with companies like Waymo, while others are buying their own autonomous solutions like Argo.ai and Cruise. However, many of these companies still do not have access to the same hardware, software and chips that Tesla does, and while some of them have some experience in software, it's what I would call rudimentary, comparatively.

I may be wrong, but how I remember the ongoing autonomous car revolution is that it all started with Google's self-driving car project, now known as Waymo. Also remember the text in bold for a few moments. Either way, luckily analyst Patrick Moorhead suggests a solution for those car manufacturers that are behind, namely to build their own hardware:

To be able to do what Tesla did, you would have to hire some of the best architects in the world and keep them hidden from the world for years until they come up with a chip that works. Tesla effectively did that by hiring people like Intel's Jim Keller and you can hear what he thinks about autonomous driving. As far as I can tell, none of the auto manufacturers have the people or willingness to spin up an entire chip division to build chips for their own needs.

What Mr. Moorhead is suggesting to me effectively sounds like what Seeking Alpha author Mark Hibben has called the "new paradigm" of semiconductor companies. These companies built chips (silicon) for their own products, manufactured at foundries such as TSMC (NYSE:TSM). This compares to the old paradigm where PC OEMs would buy chips from companies such as Intel or AMD (NASDAQ:AMD).

This, however, is not the reality of how the self-driving car space now seems to be evolving. Currently, Intel's Mobileye has the vast majority of the L1/L2 and L2+ advanced driving-assistance systems (ADAS) market share. Mobileye as L1/L2 provider is a Tier 2 company: it provides a chip with software and sells it to a Tier 1 supplier who integrates it in a module and sells that to car manufacturers.

This is also what Mobileye is doing for its self-driving car business: it is developing a complete self-driving system (SDS) solution that it can sell to any car manufacturer - I suppose in this case Mobileye rather acts as a Tier 1 supplier.

This, then, would be a valid strategy for any car manufacturer. They don't have to build their own hardware or software for self-driving cars. They can go to Mobileye, Nvidia (NASDAQ:NVDA) or Qualcomm (NASDAQ:QCOM), integrate their SDS to become a consumer autonomous vehicle (AV) and call it a day.

Mobileye's EyeQ5 will hit the road in 2021. The EPM59 with nine EyeQ5s will be deployed this year. 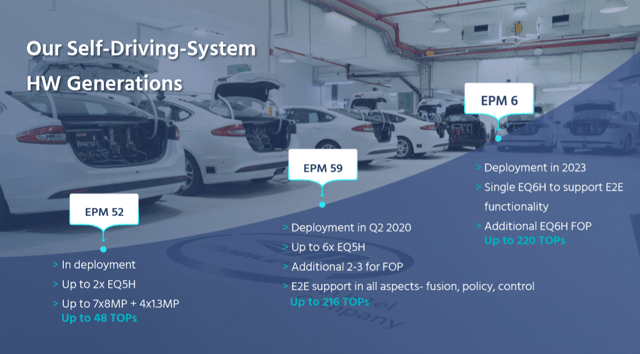 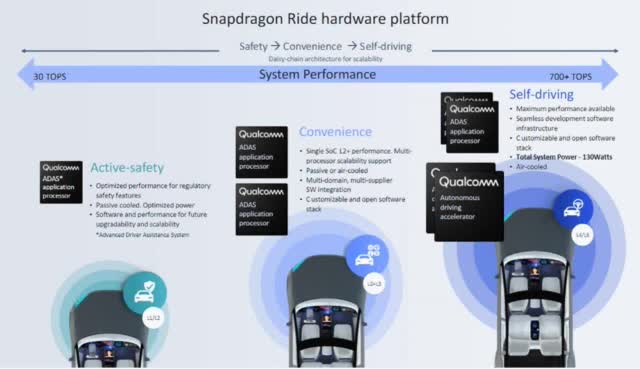 Mobileye will start shipping (consumer AV, not ADAS) in 2022, Qualcomm in 2023 at the earliest. This has allowed even startups such as NIO (NYSE:NIO) to get access to FSD, as NIO will be Mobileye's first customer for consumer AVs in 2022, reducing Tesla's consumer AV "lead" to three years.

Even for companies that want to develop their own self-driving car software, they do not need to develop their own hardware. Mobileye has spent a significant amount of resources in collaboration with Intel to "open up" its EyeQ chips via libraries and APIs. This allows third-parties to program the EyeQ5 (and EyeQ6, etc.) with their own software.

And lastly, no, Mobileye, Qualcomm or Nvidia are not six years behind in hardware technology. In the case of Mobileye, the company got its EyeQ5 chip back from the fab in late 2018, built on TSMC's latest 7nm process technology. It got deployed in Mobileye's fleet in late 2019. While it is not as powerful as Tesla's (in amount of TOPS), it is much smaller (about half the size of high-end smartphone chips) and also consumes much less power. As a solution, Mobileye intends to use up to nine chips in its first commercial self-driving system (as mentioned above).

Even if Tesla were six years ahead in any way, this likely won't be a problem anyway, as self-driving cars for consumers are still multiple years out - most likely also Tesla's.

The cost of an SDS will still be prohibitive for the foreseeable future for mass adoption in consumer vehicles. For example, Waymo's latest self-driving cars likely cost several grand. (Although it, of course, isn't intended for consumer AVs, it does demonstrate the current cost of reliable AVs.)

In that light, Mobileye sees the autonomous revolution as beginning with a robotaxi phase, starting in 2022 for Mobileye. Only after this phase has ramped, will the consumer AV phase really take off, around 2025. The robotaxi phase is useful for several reasons, according to Mobileye.

It will likely take some years until those hurdles are overcome. The fourth hurdle of course remains general reliability (as measured in performance vs. humans).

The Forbes article closes out as follows:

Auto manufacturers struggling to keep up with Tesla should seriously consider giving NVIDIA another look if they want to have any hope of being able to stay relevant.

While the author did come to the same conclusion eventually - for manufacturers to buy their SDSs from a supplier - it presents Nvidia as the go-to supplier of SDS.

It is difficult to know who is really how far along the path to viable AVs, as this cannot be measured by TOPS alone. For example, Mobileye has said it wants to do 1000x better than humans, by combining camera and lidar/radar solutions in a redundant fashion (as opposed to 'sensor fusion'), but it has not provided any details about how close it currently is to its goal. At CES 2020 in January, Mobileye released a 20-minute unedited clip of one of its AVs driving in Jerusalem.

There are several takeaways.

Summing up, arguably, Mobileye, in fact, currently has the most advanced AV hardware with its 7nm EyeQ5; the Tesla FSD chip is built on TSMC 16nm. So, the actual 'lead' may be a few years for Mobileye. Any car manufacturer could go to Mobileye and have two options, in general:

Tesla does get some credits for actually shipping in cars already.

Who is the furthest ahead in actual self-driving car capabilities (the software part) may be impossible to tell, unfortunately. Most companies have expressed that the disengagement ratio is an unsuited measure. However, several companies will launch their robotaxi business in the next few years. Tesla, for its part, has said it is undergoing a rewrite of its foundational software, which seems to indicate it still has a lot of work ahead.

Lastly, high-volume consumer AV deployment is not expected to happen until after the robotaxi phase (around 2025), in general, due to cost, scale and regulation. Even if Tesla gets its software functional before then and solves the HD mapping part (scale), regulation may remain a hurdle.

So, if Tesla will be able to gain any lead in consumer AVs will remain to be seen and seems doubtful at best, despite shipping. At present, the earliest consumer AVs I am aware of are from NIO in 2022, using Mobileye's SDS. I would note, by the way, that Mobileye's SDS will also have the chauffeur (robotaxi) mode that some Tesla fans have been talking about.

Disclosure: I am/we are long NIO. I wrote this article myself, and it expresses my own opinions. I am not receiving compensation for it (other than from Seeking Alpha). I have no business relationship with any company whose stock is mentioned in this article.