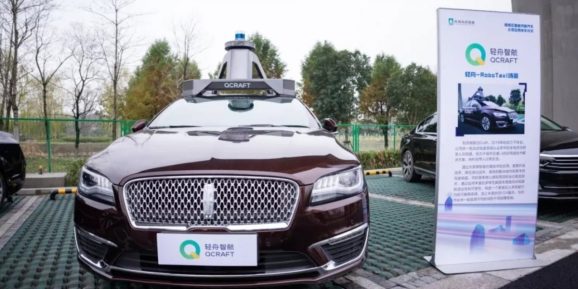 Qcraft, a robotics startup focused on autonomous vehicle (AV) development, this morning announced it has raised over $24 million in seed funding. (A spokesperson wouldn’t disclose the exact amount, but said it’s in the “dozens of millions.”) The company says it will use the capital to further develop its large-scale intelligent simulation platform, which generates driving scenario data that helps engineers optimize autonomous systems’ motion planning and decision-making capabilities.

A simulation-based approach to AV development isn’t novel — Waymo, Uber, Aurora, GM Cruise, and Argo AI are among the startups using digital environments to tune the AI underpinning their driverless cars. But Qcraft claims its simulation system and self-learning framework are more sophisticated than most, with a focus on use cases in complex urban environments. Qcraft says that in practice only three steps — mapping, simulation, and validation — are required to tackle real-world driving scenarios with its toolkit, thus “immensely” reducing test costs and boosting development efficiency.

“Different from the conventional roadmap of autonomous driving companies, [we are] taking a unique way to make self-driving cars fully autonomous,” said Qcraft in a statement. “The holistic solution to this challenge is finding and solving the problems through the collection of a large quantity of real-road test data and repeated manual adjustments of algorithm parameters. In real scenarios, the data collection would require large fleets and millions of miles of real-drive data, and the solution is very costly and simply infeasible.”

Qcraft’s sensor fusion and synchronization ostensibly ensure “better” and “faster” object detection while supporting the capabilities of different sensor types, like cameras, lidar sensors, radars, and inertial measurement units. On the simulation side, the company’s software can reshape corner cases from real-world data. To this end, Qcraft says its vehicles trained in simulation can autonomously drive on highways and park themselves in parking lots, and it recently demonstrated that they’re able to navigate “complex scenes” like fast-food drive-throughs.

Qcraft’s autonomous driver system is designed to be deployed across a range of vehicle platforms, the company says, as well as business applications encompassing robo-taxis, food delivery vehicles, and level 3 passenger cars. (The Society of Automotive Engineers defines level 3 cars as those with environmental detection capabilities that can make some decisions for themselves in geofenced locations but still require human oversight.) The company is currently testing 10 cars with level 4 autonomy (which can handle most scenarios but still require a human driver) in China and in California, where it has a license from the DMV to drive them on public roads.

Qcraft was founded in March 2019 by four Waymo engineers: cofounder Wang Kun, who spent three years at Waymo’s simulation team as a software engineer; Yu Qian, a former tech lead at Google Maps and Waymo; and Hou Cong and Da Fang, engineers who previously led Waymo’s perception and motion planning teams. The rest of the company’s workforce — roughly 130 people spread across research and operations centers in Beijing, Shenzhen, and Silicon Valley — hail from leading self-driving companies like Tesla, Uber, and Ford, as well as tech giants like Nvidia and Facebook.

IDG Capital led the seed round, with participation from Vision+ Capital and Tide Capital.