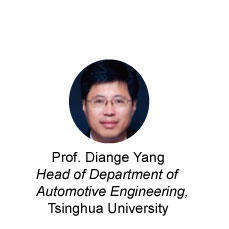 Vice-Director of State Key Laboratory of Automotive Safety and Energy, 2014-2016

Dr. Diange Yang is the Chair and Professor at the Department of Automotive Engineering of Tsinghua University. He received his Ph.D degree at Tsinghua University in 2001. He was Supported by the National High-level personnel of special support program (“Ten Thousand Leading Talents Program”). His research work mainly focus on Intelligent Vehicle and Autonomous Driving. His research has been sponsored by the NSFC, 863 and Chinese industry. Since joining Tsinghua University in 2001, he has attracted research funding for nearly $3.5 million. Professor Yang has authored 11 software copyrights and registered more than 48 national patents, he also published 120 papers of which 88 papers have been cited by SCI and EI, and he has been invited to talk at the well known international conferences 7 times and chaired the conference sessions. He has received numerous awards during his career, including the Excellent Teaching Award of Tsinghua University in 2013, the Distinguished Young Science Technology talent of Chinese Automobile Industry in 2011, the Excellent Young Scientist of Beijing in 2010. He is also the recipient of the Second Prize of National Technology Invention Rewards of CHINA in 2010 and in 2013.

Part of the Refereed Journal Articles