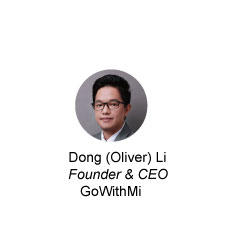 With over 20 years of global operating experiences and continuous successful entrepreneurship ranging from big data, mobile, and the mappingsectors; Oliver has deep insight and strong leadership in the industry forefront. One of his successful exits was as co-founder of Cennavi, the largest UGC map in China, being acquired in 2008 for 100 million RMB by NavInfo (002405.SZ), the largest listed company in China,and is currently its second largest business. Oliver's next company LBAdvisor Technology, abig data-focused company that was acquired in 2016 by Blue Focus (300058.SZ), a global top10 largest PR company. He was the head of Navteq Asia Pacific, the world's largestinfrastructure map service provider before founding GoWithMi. Navteq was acquired byNokia at a record price of 8.1 billion euros at the end of 2008 and was renamed Here map. At

GoWithMi Oliver is creating a mapping ecosystem that will compete in developing markets in ways no other company can.