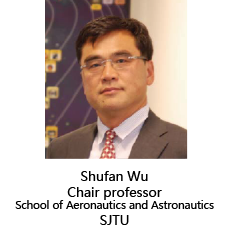 Dr Shufan Wu is currently with the Shanghai Jiao Tong University (SJTU), School of Aeronautics and Astronautics, as a chair professor and the director of Smart Satellite Technology Centre (SSTC), focusing mainly on micro/nano satellite technologies and applications. Before joining SJTU, he has worked for the Shanghai Engineering Centre for microsatellites of the Chinese Academy of Science (CAS) for 4 years, for European Space Research and Technology Centre (ESTEC) of the European Space Agency (ESA), located in the Netherlands, for 11 years, for Surrey Space Centre/Surrey Satellite TechnologyLtd（SSTL）in UK for 3 years, and for TU Braunschweig in Germany for 2 years. He served also as an associate and full professor in the Nanjing University of Aeronautics and Astronautics (NUAA) for 6 years after his PhD program from NUAA. He is an associate fellow with the AIAA (American Institute of Aeronautics and Astronautics). On Sept 25th 2015, his team has launched 3 Cube Satellites, called STU-2 mission or TW-1 mission, from Jiuquan, China, as the first bunch of Cube Satellites in China, targeting CubeSat technology demonstration and application for Earth observation and marine/air traffic monitoring.